Well-schooled and skilled at writing detail without overwhelming the reader, you get the sense that Swanson can make an adventure out of drinking a cup of coffee.

His early American novels adhere strictly to historical fact though his narrative is fictional. They are from a part of our past that has been glossed over in our history books; cleverly interwoven stories about American history, which leaves you entertained and enlightened. They are stories that needed to be told.

The rare ability to push for perfection is apparent with each new release. Since 2013, and the introduction to his writing style, each subsequent book has shown the consistent and amazing talent to bond with the reader regardless of genre; HIstorical Fiction, Middle-Grade Fantasy, Memoir, or his latest, a 50-page chapbook entry of Poetry and Prose.
​
Writing for different genres follows his penchant for sharing things he is passionate about and/or those things coming from personal experience.

A BOWHUNTER IN GOD'S CATHEDRAL
Poems and Prose | An intimate look into the heart and soul of an outdoorsman.

Have you ever hiked a trail through woods or fields while alone, marveling at what nature offers, or simply watched the sun set over the horizon?

SIMPLER TIMES is a vivid, nostalgic, and intimate memoir of growing up in the early 50s.

The Black Hills are lost, the Bozeman Trail is closed, Custer is defeated, cherished Sioux leaders are murdered, and the final injustice is delivered at Wounded Knee Creek.

The Thirty-Ninth Man is a historical novel culminating with the mass execution of thirty-eight men, the largest mass execution in the history of the United States. 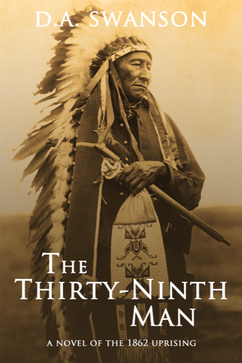 August 19, 1825, in a place called Prairie du Chien, Michigan Territory, under the guise of concern but wrapped in a cloak of deceit, the federal government began a series of treaties with the Sioux Nation that would lead to the outbreak of the Sioux Wars, and the end of a way of life.

In 1862 with the beginnings of the Sioux Wars in the Minnesota River Valley, a mixed blood named Anton McAllister balances on the razor thin line separating corrupt Indian agents, unscrupulous fur traders, the U.S. Army, and powerful chiefs from the Chippewa and Dakota nations.

When his best friend is falsely accused of war crimes and sentenced to die, Anton finds himself in a race to save his friend from the gallows.

To order your author's signed copy of The Thirty-Ninth Man, click here.

The Wild Ways
MYSTERY OF THE HANGING TOWER
A WHIMSICAL STORY!